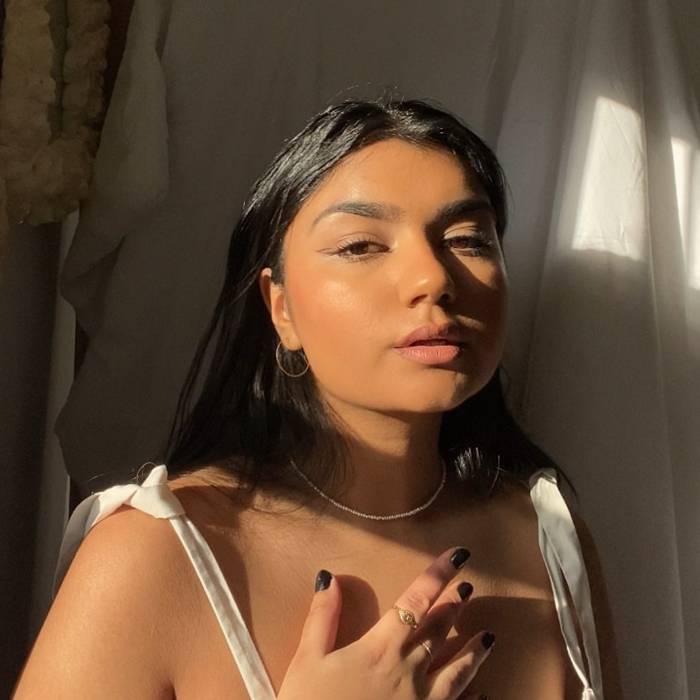 By: Trishna Rikhy | Makeup.com by L'Oréal
Share this page

Marbles Valdez is taking New York City by storm — or, more specifically, New York City’s nails. The 21-year-old is a self-taught nail technician with her own studio space operating in the Lower East Side, and a long list of loyal clients matching a just-as-long list of people waiting to get on her books. To put it into perspective, slots for an entire month are filled within minutes of being released.

Her Instagram, @ibedoingnails, has grown to over 13,000 followers since she began posting out of boredom in the beginning of the COVID-19 lockdown. Her signature look? As much extra-ness as possible. Intricate designs, dozens of charms and all-out maximalism are embedded in her nail art vocabulary. Since starting her nail business as a hobby, Valdez has grown to do nail designs for major influencers, celebrities and events.

Ahead, we spoke to Marbles Valdez about her journey as a self-taught Gen-Z nail artist who owns her own nail business in New York City.

When did you start doing nails?

In middle school, I would always watch nail art things. I don’t know if you remember the Tumblr and YouTube days of watching nail art tutorials, or if you’re familiar with Cute Polish – that was my favorite YouTuber in the whole wide world when I was 12 or 13. I would copy nail art tutorials every weekend, just doing new stuff, and then eventually I grew out of it. I started getting back into doing nails when I was in high school because I liked all the extraness and stuff. That was always my personality, but I couldn’t afford all the extra stuff, so I would just get my nails super long and stick to my pinks and purples and blues. It was just very basic. When I went to get my prom nails done, they were so badly done. It was nothing like I wanted. It made me so angry that I was like, “I’m going to take matters into my own hands.”

From that point on, I would get my nails done, but I would put little things on them myself. I’d get my own rhinestones and decorate them. When I started college, that was when I started doing my own nails to save money. When quarantine came around and the pandemic had hit, I started getting really into it just to get my brain going, to get stimulated doing something in the crib. That’s when everything popped off. I was doing my own nails and making press-ons for my friends so they could feel cute, too. I made my own little spam account, which is the account that I have now. I had 20 followers, and I would post random nail ideas that I was doing in the house. Eventually, people started sharing my work and asking me questions, like how much I charged for this or that. I was like, “What, charge money?” Like, what? I didn’t think it would get any attention in that way, but I was very open to it, and it just snowballed from there.

What inspired you to start your own studio? How did you know it was the right time for you?

When I had the idea to do my own studio, it was because, at the time, I was working out of a traditional local nail shop with five other women, smushed into a really small space. I had no issues with it, but eventually, I really wanted to have a more personal experience for my clients. The boss that I had at the time was controlling what prices I was giving to people, and I felt like I didn't have a lot of control in that way. I also just wanted a different setting so that I could feel more comfortable, and [help] my clients feel more comfortable. I was so skeptical of getting my own place, just because I'm not the best with budgeting. I've never had my own little working space, so it was really a big leap for me, but I knew that it was necessary if I wanted to grow.

What are some nail trends that you’re loving right now?

I love anything that's 3D or sculptural, things with a lot of emphasis on textures. I remember doing a manicure that was fuzzy and furry. Anything that has 3D bubbles or raindrops I love, and same with anything that looks really abstract. My favorite style, though, is always going to be the super-cute, Kawaii, pastel-girly looks.

What are the biggest nail trends you’re predicting for fall?

I think new nail trends are definitely going to align with the new subcultures that are popping up. Like, the “clean girl aesthetic” and more styles like that. I had a girl come to me wanting something that was “coastal grandma vibes,” and I gave her a cute marble, ocean-y looking vibe with little seashells to make it a bit more extra. I also think a lot more airbrushing will be popular, and using new materials in innovative ways.

As a self-taught artist, what advice would you give another creative entering the beauty world?

Practice, and don’t be scared to do it. Practice on people, practice on your friends, practice on friends of friends and mutuals — literally on anyone that will let you do it. Take that opportunity and run with it, because that’s what really helped me out in the beginning. I have very supportive friends that let me practice on them, and then they recommended me to other friends, and to have that word of mouth going helps a lot. You have to keep pushing against obstacles and know that you’re doing this for a reason.

What’s next on the horizon for you?

I have so many ideas, you have no idea! I really want to do more media and event jobs, those things that’ll kind of immortalize my work in some way. I’ve always been interested in doing something film and TV related, and if I can get into that industry by doing nails, that’d be a really cool way to start off. I’ve always wanted to do something with fashion, like have my own fashion brand. I went to FIT, and I studied fashion in high school as well, so if I could transition from doing nails to going to fashion a little bit more, I can expand my brand. I want to show I’m a creative in every sense and aspect, but I’m really passionate about what I’m doing now, and forever grateful to anyone who has ever let me do their nails, anyone who has ever congratulated me on any success I’ve had, anyone who has ever given me a job for a photoshoot, all the little things that have helped me get to where I am now. I’m incredibly grateful, and I only want to do more.

This interview has been edited and condensed for clarity.